The year is 2019. You’re knackered because Shirley was banging on at the coffee machine so instead of getting your fourth cup of the day, you pretend to receive a phone call. Back at your desk, the Design team suggest a few drinks down the road, and you stand up immediately because alcohol will do for now. They don’t wait, but that’s fine because you definitely know the address. While you’re packing your bag, your phone buzzes, it’s that girl from Hinge. “Fancy a pint?” You don’t reply because you’re cool on social media, and put your phone in your bag pretending to be calm and collected.

At the bar, you sit and discuss the text with a colleague for about 40 minutes and then decide to act on it. It turns out she’s down the road. You go and meet her, but sparks don’t fly. You go home together, regardless. Afterwards, she asks for your Instagram, and you give it to her. Excellent choice – now you’re aware she’s going to see any photo you ever post. Why didn’t she ask for your number? You wonder this while you’re walking towards the tube station. But you never get an answer to that because it’s 2019. You’re knackered. And life is a paradox.

Have you ever been ‘networking’ and found that no one asks for numbers anymore, only handles? As if there’s a second round of screening needed to happen before you can receive a standard phone call from this magical person?

“With the rise of Social Media Influencers that our digital selves are more influential and essentially ‘cooler’ than we actually are in real life.”

Indeed, it’s clear with the rise of Social Media Influencers that our digital selves are more influential and essentially ‘cooler’ than we actually are in real life. According to Influencer Marketing Hub, a mid-level influencer can earn between £250-500 per sponsored post, and a top-level (500,000 plus followers) can charge up to £2,000 per post.

On top of this, these influencers are fuel for the self-help revolution that has taken our society by storm in the past few years. With activists such as Jameela Jamil standing up against celebrities who promote weight loss inducing tea to their young followers in exchange for a paycheque, Jamil demands that we question how social media is affecting the minds of our society.

How about the controversy surrounding virtual influencers? In an article on the VOX, Kaitlyn Tiffany makes an extremely valid point in saying that “They are physically perfect women made of pixels, standing in for women who have long been pressured to become physically perfect, without the advantage of that even being possible. Isn’t it interesting the way we can talk out both sides of our mouths, simultaneously espousing a new age of body positivity and self-acceptance, while also making it clear that supermodels are incapable of reaching beauty standards set by things that are not even alive?”

“if we continue to promote unrealistic visual expectations, then are we accepting the end of body happiness and genuine self-appreciation?”

From Balmain creative director Olivier Rousteing’s #BalmainArmy of virtual models to the virtual Instagram models/stars @shudu.gram and @lilmiquela, who knows where the line will be drawn or whether a line will ever be drawn in terms of censorship. Surely if we continue to promote unrealistic visual expectations, then are we accepting the end of body happiness and genuine self-appreciation?

From the virtual game, Second Life, launched in 2003, which provided us with online avatars to interact with other avatars controlled by real people, to now having entirely fake models showing us how clothing should look, I wonder who we’re all trying to be?

Personally, I’d quite like the Nokia 3310 to come back, HMV to re-open its single sales for Walkmen and style coming from within rather than from influencers. But hey, I’m probably not worth listening to because I only have a few hundred followers. 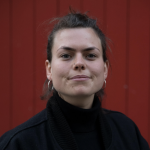 Writer Kelly is a graduate of both a Creative Writing degree from Capilano University, Vancouver, and a BA (Hons) Advertising degree from London College of Communication. Co-founder of Halftime London, an online publication and community championing females in sport, she also freelances as Lead Production Scriptwriter for Cannes Lions and currently interns for FashNerd.com.