I decided to give a keynote on the merger of Artificial Intelligence with textiles because I believe that A.I. is capable of creating the next wonder material. With the rise of smart textiles creating a fourth industrial revolution for the textiles and fashion industry, I think that once fabric gains intelligence nobody would want to go to dumb again. Representing a significant opportunity for new and established textile companies to evolve, A.I. as the brains behind smart textiles could mean that wearing tech on the wrist could become obsolete.

Different Ways A.I. Is Being Applied to Textiles

The good news is that A.I is already revolutionising many industries. It is changing the way we travel, do business, shop and socialise. With new endeavours emerging all the time, education and understanding of A.I. is becoming crucial. It is only when companies understand how groundbreaking A.I is, that they will be able to benefit from performance-enhanced apparel.

That being said, the merger of textiles and A.I is still in its infancy. Opening up to the world of A.I, companies and makers are still experimenting with various avenues and one of these companies in QOOWEAR. They have produced AI-controlled Thermal Wear, which can automatically change its temperature during any activity, regardless of what the external weather conditions are. Based on selected heating points, QOOWEAR uses Artificial Intelligence to recognise, in real-time, the coldest points of the body, giving them the priority to be actively-heated, including critical anatomical areas such as fingers of hands and feet. It also integrates sensor systems used for real-time biodata analysis and health’s risk prevention.

QOOWEAR is not alone in the A.I. textile revolution there are other brands taking advantage of artificial intelligence meets fabric like JanSport. They have developed 300 backpacks with programmable fabric, which allows users to share a song, music video, a Facebook page or Internet link with anyone nearby. Appealing to the digital natives, the concept was born from MIT professor Yoel Fink, to reinvent fabrics as programmable devices. Then there is Skiin, a brand that uses artificial intelligence to interpret the wearer’s bio-data, and Sensoria, which has introduced an Artificial Intelligence enabled real-time coaching, and sensor-infused smart garments and a new A.I. enabled coaching App. Let’s not forget about SUPA who have come up with an A.I powered sports bra which allows wearers to track heartbeat, steps, etc.

Can Artificial Intelligence Create the Next Wonder Material?

The simple answer is yes and looking at the new possibilities that programmable materials offer is a great start. Programmable materials are a new class of revolutionary materials that can be manufactured once and then programmed to alter their properties and shape on the shape of demand top suit. Already on it is designer Danit Peleg and the brains at MIT. Pelleg has been concentrating on modelling fabrics into three-dimensional structures, and MIT has been taking existing material systems like fibres, sheets, strands and three-dimensional objects and programming them to change shape and property on demand.

Although Pelleg and MIT are exploring the possibilities using A.I, the naysayers are keeping progress at bay. To curb the increasing issues like waste and pollution, it is imperative that the fashion industry invests in A.I. because doing enable companies to obtain or sustain a competitive advantage and AI could allow them to move into new businesses and ventures. So now imagine a future, were A.I has played a role in creating an eco-friendly programmable fabric that can hear, see, sense and act, now would that be something. 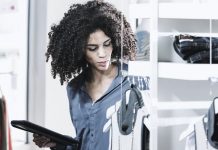 Meet The 10 Innovators Reshaping the Fashion Industry For Good

Ground-Breaking Nanotechnology, The Optimal Solution for Fashion And Textile Companies

Jul 5, 2017
We use cookies to ensure that we give you the best experience on our website. If you continue to use this site we will assume that you are happy with it.Ok